Scammer Alert: Why you will fail when you attempt to hold Me to ransom.

It's really rather hilarious how these "wannabe" subs throw their toys out of the pram the moment they don't get their own way. 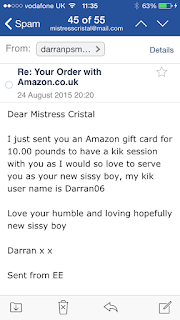 Now this idiot applied to serve Me last week. I deleted and ignored his application for the simple reason that he clearly had not read My website. He asked for intimate body worship. Had he have put in the effort; he would have seen that I don't offer this - even in fantasy. It's a hard limit. Needless to say; his tribute was refused. It will not be redeemed, and will return to him. He should consider himself lucky really. Normally, tributes are non-refundable. But because I had a gut feeling about this moron, I chose to refuse his tribute...and it would seem that My gut feeling was indeed correct. 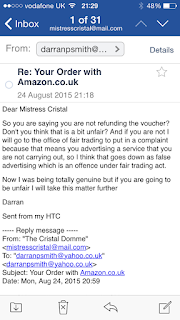 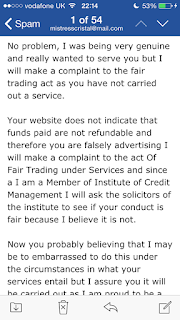 Now this is a classic example of a wannabe sub who thinks he can hold Me to ransom simply because he didn't get what he wanted. He thinks wrong. I won't be dictated to by him or anybody else for that matter. But here are My thoughts on the matter.

First; I explained to him that the voucher would be reverted back to him. I am not refunding the voucher - because I didn't claim it in the first place. Amazon will be refunding it. But he was too busy stomping his feet to understand that. Second; he is more than welcome to get his team of solicitors to "deal" with Me. In fact, I welcome him going to the Office Of Fair Trading. I'm sure they will be very happy to deal with his complaint. What is he going to do? Ask them to take action because I REFUSED to take tribute from him? Yes, I'm sure they will take him seriously - not!

Secondly; the definition of false advertising is that is the use of deceptive or misleading statements in advertising is prohibitied. Yes pillock; I too know the law! At no point does it state that by REFUSING to take tribute for a service I REFUSE to give to a particular person; is false advertising. Indeed; because I haven't actually taken any money from him; I am not obligated to provide him with anything. No money has changed hands. Indeed; at no point did I demand tribute from him. I ignored him; and all subsequent emails from him. He sent it off his own back to try and blackmail Me into giving him attention.

This sub-human decided to spend the evening making these ridiculous threats; thinking he was backing Me into a corner and I would crumble and give him what he wanted. Wrong! And by doing so; he has demonstrated his ignorance and complete lack of knowledge about what it means to serve a Dominatrix. I don't HAVE to train anybody. I pick and choose who I feel is worthy of My attention. And if I feel you don't make the grade; I will refuse you and your money. I don't owe you anything - ever. I have the absolute right to refuse to entertain you - and to refuse any money you decide to send to Me. Remember that!