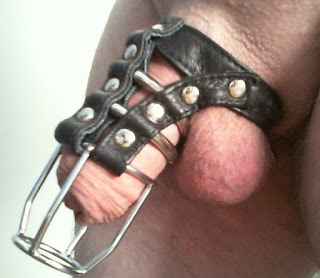 Another highly satisfying session with pain sub (who is now chastity sub as the picture suggests.) You see; Mistress is suffering at the moment. I have a slipped disc in My lower back and I'm in a lot of pain. And because I'm in a lot of pain, My subs have to be in a lot of pain. Call it compensation for My current condition. Or maybe because there's a "y" in the day. What can I say? I'm a Sadist - I give pain rather than take it.

So this afternoon; chastity sub was put through his paces. Off came his chastity cage and on went the bulldog clips. I love to watch him stretch his balls and his foreskin - it's very pleasing to see him wincing as he is made to pull harder and harder. He even got to do some exercise! He's purchased a new weight for his ball parachute and I made sure that he had good use of it. Jogging on the spot, push ups, star jumps, squats - each one designed to make that weight tug hard on his balls. The fact that he was sore and tender means he was doing it correctly.

And finally the nettles made another appearance. We haven't used them for a few weeks; so he was more than over due. Handfuls of nettle leaves rubbing vigorously against his balls and his cock. Oh he's going to be feeling that for a while! If you look closely; you can see the evidence on his ball sack!