From Monday 27 February and in accordance with NiteFlirt Terms & Conditions; I will no longer be taking calls which relate to the following topics:

Any such goodies/clips which relate to this have now been deleted from My NiteFlirt profile in accordance with these policy changes.

These policy changes do not necessarily reflect My private Skype sessions. I am of course; more that willing to discuss the above in these session, provided such topics are legal and within My hard limits.

If there is something in particular you wish to discuss either via NiteFlirt or in a Skype session, and you are unsure if it is permitted; you are invited to contact Me via the link below:

CONTACT MISTRESS CRISTAL
Posted by The Cristal Domme at 04:54 No comments:

Sad news I'm afraid folks. Vinyl Vera got a puncture and is beyond repair. I guess She encountered a little prick!

Happily though; Vinyl Vincent is here to save the day. As you can see; Chastity Sub is definitely getting acquainted with him!

Posted by The Cristal Domme at 01:17 No comments:

Chastity Sub learns not to be forgetful...

Oh dear, oh dear. It would seem that Chastity Sub has become forgetful in his old age. He neglected to inform Me that he actually has a blow up doll in his collection of fetish toys. How did I find out? Through a very incriminating tweet he made. This; I have pounced on and I intend to exploit this opportunity to humiliate and degrade him even further. 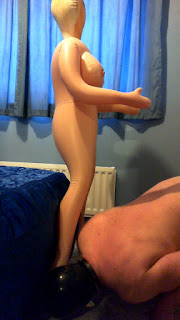 I have decided to call his blow up doll "Vinyl Vera." She is now known as his girlfriend. It is true that he is not allowed a girlfriend in human form. It is also true he is not allowed to fuck anything other than himself and an inanimate object. But that doesn't stop Vinyl Vera from fucking him. Here, you can see him kissing Vera's feet. Of course with her being female, she is Superior by default. And that means he must show her the same amount of respect he shows Me.

Even though I have given him the opportunity to fuck Vera, purely for comedic effect; I much prefer it when Vera fucks him. I think it adds a delightful twist to his humiliation. What a better way to learn to service cock; when it's the cock of a Superior Woman - even a plastic one! 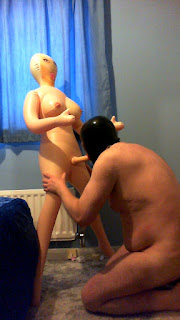 Granted; she doesn't have the capacity to ram her cock down his throat. That's what I'm here for. But still; it's always a good idea to make him practise. After all; practise does indeed make perfect. 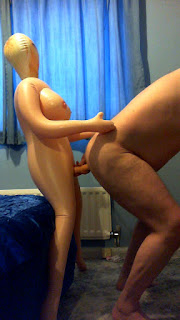 And as a reward for servicing Vera's cock; Chastity Slut then gets to feel it sliding in and out of his slut hole. What a better way to assert the authority of the female form! I'm pretty sure Vera got more pleasure out of it than he did, especially since he's still in chastity. No, he's not allowed to relief. Not until 1st March - extra days added for below par behaviour!

You can see more of Chastity Sub's shenanigans with Vera via My clips channel at the link below. Try not to laugh too hard!

Posted by The Cristal Domme at 06:33 No comments: